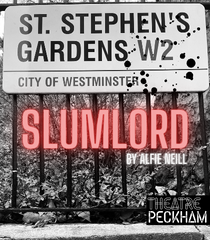 Neighbour. Father. Rent collector. It’s the winter of 1966. Notting Hill. The reign of the slum landlords in West London is at its end but for the residents of St Stephen’s Gardens, they pay the punishing price of its darkest hour. SLUMLORD is a work in development curated and written by Alfie Neill.

A script in hand performance.

There is no allocated seating for this show.