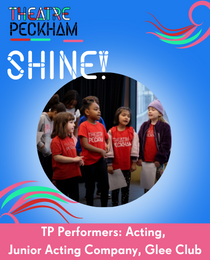 What if? (Junior Acting Company, 12-16)
Someone is missing from class and the kids have to figure out what could have happened. By remixing fairy tales with the modern world, the children ask themselves where could the missing child be? Really asking the question… “what if?”

Race to the top (Acting group 2, 8-11)
Two schools, a hiking trip, one winner; but on this race to the top, something unexpected happens and they gain powers. How do they deal with these powers on the race to the top?

Home (Glee Club Jr., 8-11)
Two sisters go out to a party, against the will of their protective mother. On the way, they are told a story that changes their perspective on the family’s dynamic. Songs from your favourite musicals are reimagined in a narrative that explores the idea of home.

Rejected from the group, Juno has almost given up trying. Then he discovers that he has a power that can bring everyone together again – he is the ultimate DJ! Songs from your favourite musicals are reimagined in a narrative that explores the power of music.

Open to all ages.

Audience filming and photography strictly not allowed as the performers are under 18.