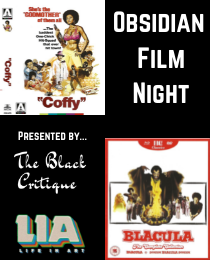 Actor Simon Manyonda & Artist Monaé Robinson come together to host a theatrical film experience like no other; a double bill of Blaxploitation Films.
The night will include a panel discussion on African American representation in Hollywood and how it has affected audiences in Britain whilst allowing a safe space for honest dialogue.
Featuring the films Coffy (dir. Hill, 1973) and Blacula (dir. Crain, 1972)
This is more than just a screening, but an analysis of how Hollywood has shaped the roles Black people play in cinema and how this transmits into the social sphere.
Presented by The Black Critique & Life in Art